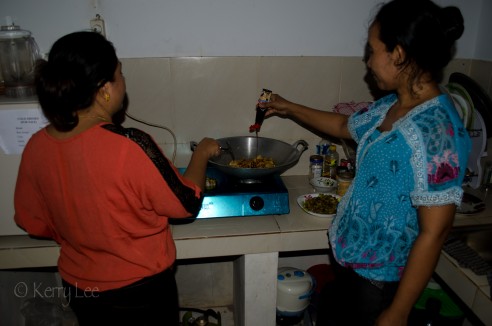 When leaving home for a distant place became less about brawn, women finally had the opportunity to venture out on their own. No longer were we stuck at home, waiting for our men to return and tell us stories about lands far away and people so different it was difficult to imagine what their lives were like.

Now, even a lone woman traveler is not unusual, though we still have certain limitations that men don’t have. Care does have to be taken with our personal, physical safety; certain places and situations avoided. But overall, thankfully, it is a big wide world open to us.

J. Kottler, in Travel That Can Change Your Life, stated: “… travel is an altered state of consciousness… transporting you not only to another place, but another dimension…”

END_OF_DOCUMENT_TOKEN_TO_BE_REPLACED

As I walked up Beverly Boulevard this morning, I learned I was something of an oddity. Nobody walks in L.A. The shops and other places of business are one story, or rarely, two stories. Neighborhoods stretch out for miles and miles. The residents here drive wherever they have to go. Valet parking is available at restaurants and clubs, sometimes free and sometimes at great cost. Cars dive into open parking spots, as if they have found gold.

There are, however, the invisible walkers. Like ghost ships on a foggy night, the homeless shuffle the sidewalks, pushing their laden grocery carts in front of them. Each seem to be following their self specific round from one spot to the next, on auto pilot. The carts are mounded with home. Sheets of cardboard, ratty blankets rank and brown with dirt, bottles of water, overcoats over the top, tied down with belts or rope. A doorway, an open alley, a crawl space next to a garbage scow; all destinations. Only someone new to town, like me, seems to see them. They don’t make eye contact, they don’t ask for money. They sit, lay, or shuffle.

The drivers in cars see me, however. I am the lone person, apparently walking with purpose, along the sidewalk. Cars wait when I step into the crosswalk, to allow me to reach the far curb before they turn. So unused to people in a crosswalk, they don’t know how to judge the amount of time needed for me to cross. They could turn in front of me three times before I arrive at the point of walking in front of their car!

Now and then I did come across another soul, apparently walking with purpose, like  me. I learned, however, that some of these walkers were actually not like me, either.

A woman in a fashionable outfit, neat and clean, swinging her phone in one hand, walked twenty paces ahead of me mid morning. I noticed her only because we were both walking alone on the long stretch of sidewalk. Suddenly she stopped and spun, waiting for me to come abreast. I smiled, about to say good morning, when she pointed at me and began to chastise me, “…walking there…talk about me…. you have issues…” She then waved me past her. When I was two or three paces ahead, I heard the angry slap of her sandals on the pavement. She quickly overtook and subsequently passed me, shaking her head.

At the next crosswalk I waited through an extra light so she could move away well in front of me. I don’t know: maybe she didn’t want to share her sidewalk with me.

A recently published article in the Literary Traveler, The Faces of Vincent.

Please  check it out!

Long ago and far away, when I was a young girl, I loved to write letters. This was a time when there were no computers, no cell phones, and… gasp… long distance telephone calls were very, very expensive. I wrote letters to friends in the city I had moved away from.  I wrote letters to my grandparents.  I wrote notes to classmates…. (antique style texting under the table) in class!  I also had three pen pals.

I don’t remember how I acquired these pen pals.  Debbi lived in Massachusetts and owned a horse.  I had a horse too, so we had lots to talk/write about.  We even exchanged black and white photos taken with our matching, Kodak Instamatic cameras.

I also had two pen pals who lived in Japan.  I think I may have made these two friends through Girl Scouts while earning one of the badges that got sewn on my sash.  Both of their names started with T, but I don’t remember anything else about them, or what we wrote about to each other.  All three of those relationships slowly fizzled out.  When I went away to college, I wrote to my parents, my friends, my grandparents.  Eventually long distance got cheaper and I did more calling than writing.

Then along came blogging.  Suddenly I found myself with all kinds of new, far away friends.  At first, I thought it was very strange to be writing back and forth with people all over the world whom I had never met.  Then I realized, it was just like having lots of pen pals!

END_OF_DOCUMENT_TOKEN_TO_BE_REPLACED

Please visit The Literary Traveler for my latest published article.

Thanks for checking in on me.

The Liquid Sparkled
Edmund Dulac
from The Little Mermaid

The thin grass strings of the ghost net were wrapped securely around my right wrist. As soon as I realized what had happened, I began to struggle. That only pulled the net tighter. The lines had been woven strong to entrap the mahi mahi. The knife had dropped from my belt when I swam down to grab the immense oyster lying on the sand. The huge mollusk was under the net that I hadn’t noticed in my eagerness. It was the size of both of my hands spread out, and I could picture the pearl in the middle, as big as my thumb. In the center of that luminous pearl, a tiny grain of sand. This, my last pearl, had quickened my karma.

My knife lay next to a magnificent, lavender sponge.  Too far, I couldn’t even reach it with my foot. The needlefish nosing around it was of no danger to me now. I settled gently next to a huge fan coral that waved gracefully in the current.  A few small blue tang paused next to me.  Blue body, yellow fins, dark faces peering inquisitively. The school grew larger and encircled me. My wake.

Letting the last of the air out of my lungs, I watched the small silvery bubbles’ rushing and jostling ascent to the surface and the sun that wavered far above.  When I inhaled again, the water felt familiar in my lungs. I was back in my mother’s womb: part of the sea, the coral, and the tangs dancing around me. I found their dance and embraced it.

The alarm jangles. I stretch, roll out, and peek through the curtains.  I’ll have to wear snow pants and full gear.  The dogs will need their jackets, too.

Although we live in the middle of the city, the park is only two blocks away. This isn’t hard to imagine since there are 136 parks in Milwaukee. The largest one is over a thousand acres, but my park is a petite thirteen. We have time to make one round. The snow crunches under my boots and the dogs leap and yip, catching the chunky snowflakes swirling furiously around us.  The moon sets to the west just before the sun begins to wash a sliver of light blue across the horizon.

First trip of the day over.

END_OF_DOCUMENT_TOKEN_TO_BE_REPLACED

A new day, a new venue, same old weather. A repeat of cloud and misty rain; spring in the Midwest. But in the writing place I was headed for…. the weather wouldn’t matter.

One enters the Milwaukee Art Museum into the magnificent cathedral-like space of Windover Hall, with its exquisite white marble floor, a vaulted a 90-foot-high glass ceiling, and above it the Burke Brise Soleil, a moveable sunscreen with a 217-foot wingspan that unfolds and folds twice daily. I flashed my membership card and walked directly to the magnificent windows to gaze out over Lake Michigan.

END_OF_DOCUMENT_TOKEN_TO_BE_REPLACED

It was quiet.  A sacred quiet. Tranquil. The spaces were large, with gentle air flow from muffled fans running somewhere behind the marble columns and arched ceilings.  I climbed the carpeted steps to the second floor of this sanctorium and made my way to a large open area designated for microfiche, business, and periodicals.

The huge windows on the north wall over-looked MacArthur Square, which is surrounded by the Milwaukee Police Department’s downtown station, and the imposing, Neo-Classic Revival County Court house (which architect Frank Lloyd Wright called “a million dollar rock pile.”  Red brick walks surrounded the plots of bright green grass in the square, though it was sleeting/snowing out.  Inside it was toasty, however, and I found an empty table with a chair facing the window.